This is an 8-day tour. Visit Jordan's unique sites, experience the country's beauty, and engage with it's people and their culture.

Overnight at a Hotel in Amman

Today, you will have the chance to get to know Jordan’s green north. After breakfast, we head to Jerash, one of the best-preserved Greco-Roman cities worldwide. Strolling through the vast site feels like walking through history, and one could easily spend a whole day discovering the ruins. However, we eventually have to get back to the bus to continue our tour. After a short drive through rolling hills covered with olive trees and light forests, we arrive to Ajloun. Here, we will visit the castle dominating the town’s skyline. The mighty fort was built to ward off the Crusader armies at the key trade and pilgrimage intersection between Jerusalem, Cairo, Damascus and Mecca. You will see, the site is very different from, but equally impressive as Jerash.

Later, we will visit a local family in Orjan, a village close by. Our local host will first show us one of his olive groves, including trees that have provided olives for hundreds of years. After a short walk we’ll then enter his family home, where you will be introduced to culture and daily life of the host community, and – most importantly – the traditional local food. This visit is a great opportunity to ask questions about life in rural Jordan! After a delicious meal, we’ll return to Amman.

Today, our journey to Jordan’s south will begin. First stop: Mount Nebo. We’ll take some time to visit the newly renovated church, and enjoy the view over the Jordan Valley. Can you imagine that it is the same spot where Moses looked across the Promised Land, but wasn’t allowed to continue his journey? We then drive a short distance to the town of Madaba to discover the amazing Byzantine mosaics excavated throughout town. The most famous of these is the ‘Madaba Map’, the oldest preserved mosaic map of the region.

From Madaba, we’ll continue further south to Karak, once an important city in the Moab Kingdom. Today, the city’s main attraction are the ruins of a massive Crusader castle. While exploring the maze of stone-vaulted halls and passageways, you will learn about the impressive insights the castle provides into the Crusader’s architectural and military skills. After this interesting stop, we’ll drive on south, until we arrive to Wadi Musa, the modern village adjacent Petra

Now one of Modern Seven Wonders of the World, Petra is known by many names, a master piece half as old as time, the Red Rose city. Marvel at the beauty of the ‘Lost City’, only recently re-discovered by the outside world.

Petra is an ancient ruined city - hand-carved into the region’s reddish sandstone thousands of years ago, then forgotten by the outside world for a long time, and rediscovered by European archaeologists in the beginning of the 20th century. Today’s visit will give you a good idea, why it was publicly elected as one of the ‘New Seven Wonders of the World’ in 2007.

We’ll enter the site through the Siq, a narrow gorge guarding the city’s entrance. At some point the high stone walls will open up, and the magnificent Treasury, definitely the county’s probably most photographed monument, comes into view. Take your own share of pictures, then we’ll continue into the city to discover the many caves and tombs, and other structures. After lunch, there is time to explore off the beaten path. You can visit some of the hidden treasures of Petra, such as the Monastery or the High Place of Sacrifice, or climb up to Jabal Khubthaa, to gain an amazing view on the Treasury from above.

Are you ready for a desert adventure?! We will meet our Bedouin hosts and set out on a 4x4 jeep safari to explore valleys and narrow gorges, discover ancient rock inscriptions, climb sand dunes and a rock bridge, and generally enjoy the majestic desert landscape. At each step you have the opportunity to hike, scramble and explore at your own pace.

Rest for a moment and enjoy a delicious lunch cooked on an open fire in the shade of the red mountains. After viewing one of the most magical sunsets in the world, we’ll return to our camp for a traditional coffee making ceremony, dinner, an experience of the famous Bedouin hospitality, and a night under the starlit sky – countless cups of tea are a must.

After waking up to a breakfast with desert view, we’ll leave Wadi Rum and head to Aqaba. Jordan’s southernmost city is located at the Red Sea and hosts the country’s only port, as well as a shore lined with world-famous coral reefs and diving grounds. Let’s go for a boat ride! You’ll have the chance to relax on the sun deck, jump into the cool waters, swim and snorkel, and enjoy a delicious lunch. Great views of the corals and beautiful fish under, and the banks of Jordan, Israel/Palestine, Egypt, and Saudi Arabia are guaranteed!

Depending on whether your departure flight leaves from Queen Alia Airport near Amman, or King Hussein International Airport near Aqaba, you will either drive back to Amman, or stay in Aqaba for the night.

Overnight: Hotel in Amman or Aqaba. 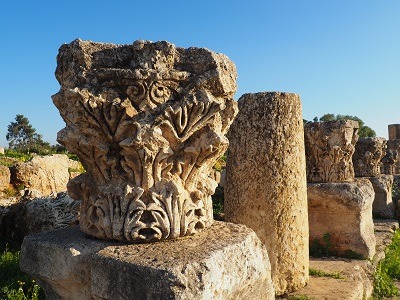 Jordan has a hot, dry climate characterized by long, hot, dry summers and short, cool winters. The climate is influenced by Jordan’s location between the subtropical aridity of the Arabian desert areas and the subtropical humidity of the eastern Mediterranean area. January is the coldest month, with temperatures from 5°C to 10°C, and August is the hottest month at 20°C to 35°C. While nights can get quite chilly throughout the whole year, daily temperatures can be very hot, especially in the summer; on some days it can be 40°C or more, especially when the Shirocco, a hot, dry southerly wind blows. These winds can sometimes be very strong and can cause Sandstorms. Even if we are running these trips during the best time to travel in Jordan, it is very important to always remember to stay hydrated. Therefore, we recommend bringing a reusable bottle with you.

...or check the travel tips on our homepage!