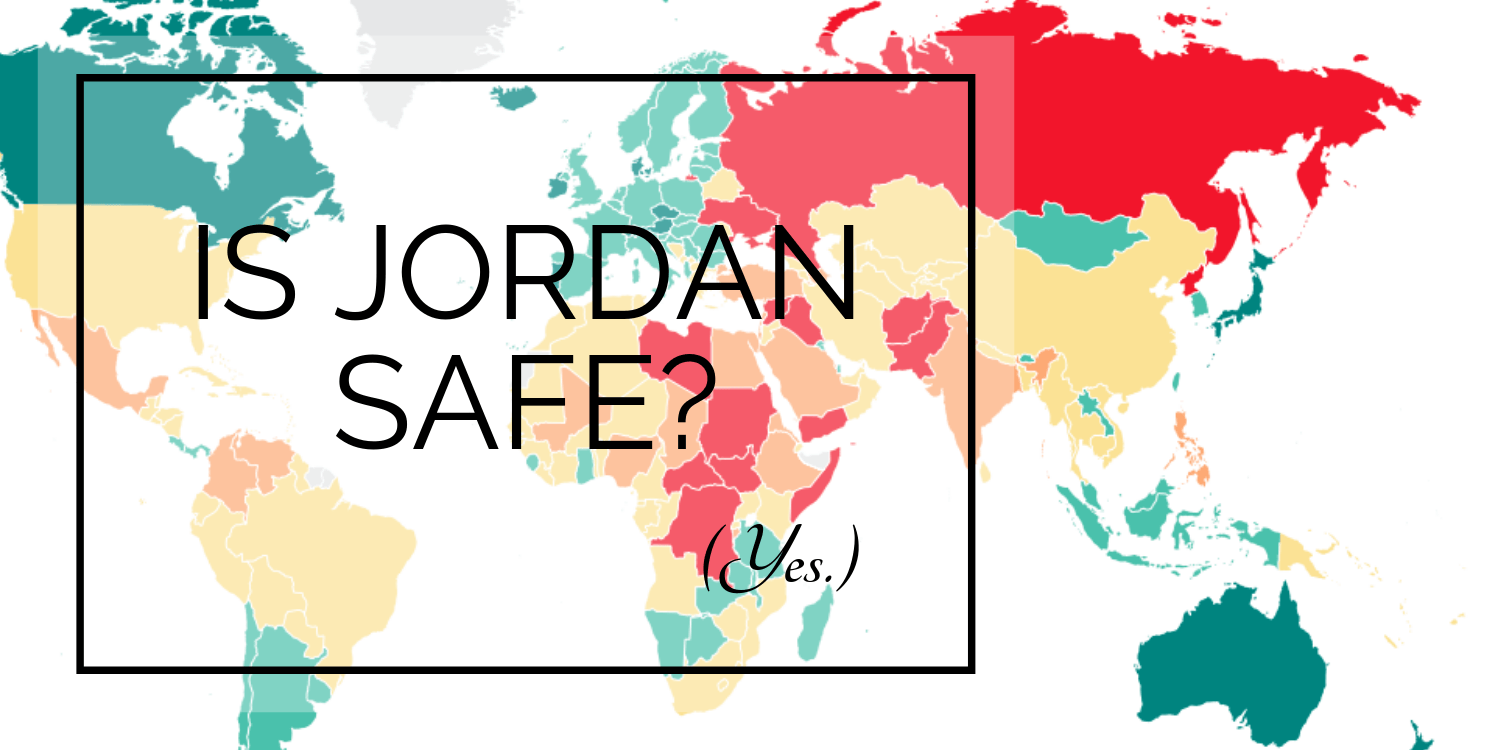 Is Jordan Safe to Visit?

…is the question everybody seems to be asking once you plan to visit the kingdom. Especially after all the events in the last decades including wars, terrorism and political turmoil. There are always going to be people who’d never even think of visiting the Middle East in fear of what may happen. However, you can rest assured Jordan takes its national security very, very seriously.

I was born in Jordan, but I’ve lived in Canada since I was two. I’ve only recently come back to live here in Jordan. And regardless of the fact that I’m Jordanian, even I had a little doubt about coming back to what I call my home. Its natural for anyone planning to visit Jordan to harbor doubts, but again, Jordan’s national security is unparalleled in the Middle East. In fact, Jordan ranks higher than The United States of America on the global peace index¹.

That being said, my expectations about travelling in Jordan have been met with the utmost satisfaction.

Jordan is steadily moving towards becoming a progressive place. At the same time, we’ve managed to establish a state of homeostasis in the Kingdom, balancing progress with our traditions. Jordan has become the ideal place to experience Arab traditions and culture. You’ll be met with what we like to call in Jordan: Jordanian hospitality. It’s similar to southern hospitality in the States except its unilateral across the entire country. Northern, eastern, western, and southern hospitality. So, the question remains: Is Jordan safe? I for one can sleep easy at night.

Experience Jordan Adventures offers amazing tours of the country along both the Jordan Trail and The Jordan Bike Trail. They stretch from Um-Qais to Aqaba, and are the perfect way to experience Jordan in all it’s facets. You’ll travel in time and walk in the footsteps of emperors and prophets alike. Feel the history seeping from the cracks and crevices of the ruins of ancient Jerash, and the seemingly timeless Rose-Red City of Petra. Live the Indiana Jones movies as if you were Indian Jones, archaeologist and adventurer, himself. And you’ll experience Jordanian culture as if you were Jordanian yourself.

One Week in Jordan

One of our summer interns has shared with us her four week journal, and now we are sharing it with you! Check out week 1 below:

Upon arrival to Queen Alia Airport in Amman, I could feel my curiosity peaking. After a few months of planning, I was ready to experience a culture on the other side of the world — with little expectations. It was midnight when I arrived and as I went to leave the airport, I was surprised to hear the sound of drums and chanting. People were doing the Dabke and gathered outside the front of the airport. Whatever was going on, I knew that it was something I would never see at home.

Stepping outside, I could even tell a difference in the air and the way it felt on my skin and in my lungs. The late-night drive to my temporary home was dark and the buildings were softly lit. I immediately noticed the difference in architecture. The traditional Arab style buildings were primarily beige stone but with their own unique details.

Over the course of the week I would learn the little quirks of the house and neighborhood. For example, the musical jingle I would hear outside in the morning was not an ice cream truck, but the gas truck letting people know when he was around to exchange containers. Or being warned of a possible water shortage because the water is not directly pumped to your taps and faucets, but rather pumped to tanks on the top of the building that are refilled every week. Luckily the Experience Jordan office is only a 10 minute walk from the apartment and goes through a lovely neighborhood and shopping area.

To my surprise, a day after arriving in Jordan I was able to go on a Jerash/Petra tour with Experience Jordan. I think the excitement of getting to see these sites gave me the motivation to overcome jetlag. I met up with a tour group who came in from Israel and we headed to the ruins of Jerash. When we arrived, I was surprised I had never heard of the ruins before. They parallel or may even surpass the impressive ruins in Greece or Rome. Amphitheatres, columns, and stone streets where merchants would sell goods gave you a perspective of what life was like for these ancient communities. That night we took a bus ride to Seven Wonders Bedouin Camp and experienced the well-known Jordanian hospitality.

In the footsteps of Indiana Jones

The following day we went to Petra. What came to mind when I thought about Petra was watching Indiana Jones find the fountain of youth. I didn’t know everything that Petra entailed, but I found that the whole area was much more elaborate than I had previously thought. I didn’t expect to see so much history in the canyon as we walked towards the treasury, the iconic structure everyone knows. Burial tombs and other carvings could be found left and right in the yellow and red streaked rocks. After walking the winding trail through the canyon, the space suddenly opens up and you’re looking up at the face of a cliff made into one of the world’s greatest wonders. Pictures don’t fully prepare you for the feeling you get when you take in the entire landscape and how much work went into this lost city. Our guide set us free to explore the different sites and walk into the ancient carved out caves.