Bekdash is a well-established business, originating in Syria, and now available in different locations in Amman like: Galleria Mall, Sweifieh, on Al-Madina Al-Monawara Street and Downtown.

The ice cream is the gem of the selection: specially formulated to make it resistant to the heat and less likely to melt! So for all those people who sarcastically comment that ice cream should be made heatproof: this one is!

The recipe and method of making the ice cream remains the same today as it did when it was first created in 1895- a true taste of tradition!

Incorporating milk, heavy cream, mastic (an aromatic resin), and flour ground from orchid tuber, this ice cream is very different to other ice cream both in taste, being less sweet, and in texture, it has elastic properties(!).

The rich ice cream is rolled in a thick coating of pistachios and cashews, adding a delicious salty crunch as well as aesthetic appeal- it’s almost as pleasing to the eye as it is to the stomach. 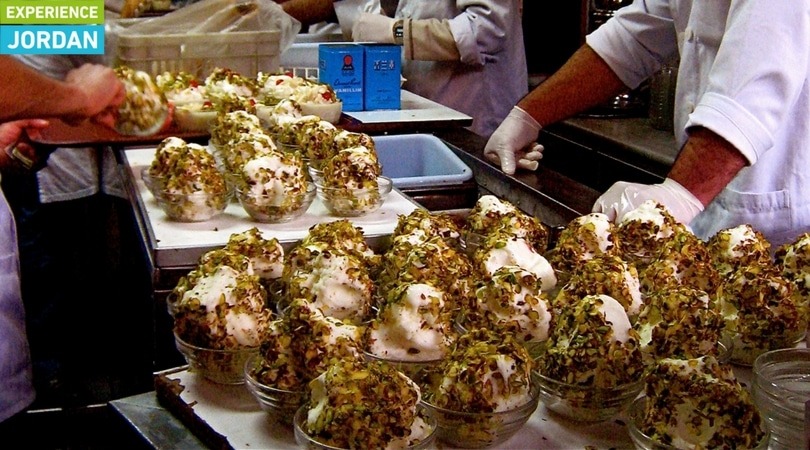 Hopefully, while you are in eating your ice cream, you will also get a chance to hear the beating of the ice cream. That’s right! The ice cream is pounded rhythmically like a drum. You will be hard put to not get up and dance.

They offer a range of flavours and toppings, but the traditional is the “Arabia with Nuts”.

To read more of the intriguing history behind Bekdash, see this article by The Irish Times.

There’s something more special than just the flavour and appearance of this ice cream though: in eating it, you are keeping something of Syria’s wonderful traditions alive. While the country may be turbulent currently, it can also be celebrated even in the simplest of ways.