Jordan’s national dish is Mansaf; as such it is essential that any and everybody who comes to Jordan tries it. Mansaf is magic.

Served on a large platter, the base is a layer of shrak, a flatbread so thin it is almost translucent. This is topped with lightly spiced rice, then slow-cooked melt-in-the-mouth pieces of tender lamb and a generous sprinkling of fried nuts.

The sauce, which the meat is first cooked in, and the remainder of which is poured lavishly over the dish, is what really brings it all together. A broth made of jameed- a hard dry goat’s milk yogurt of Bedouin origin- and spices.

But it’s not only the phenomenal flavors that make this dish special; there’s more to this dish than meets the taste buds!

Mansaf ties together the key elements of Jordanian culture: Bedouin tradition, food, and most importantly- community.

The very fact that Mansaf is eaten from one large plate exemplifies the importance of sharing all you have, a core value here.

Food is renowned for bringing people together, all throughout history people have joined together for meals: whether it is a family inviting others into their homes as a display of hospitality, or politicians meeting for a dinner over which they discuss the fate of the masses!

But nowhere brings people together over food in the way the Middle East does. In the way mansaf does. (In fact, we think it would be a very good idea for mansaf to be served at all state dinners when different nations are discussing things, as it will make them so happy and sleepy that only good things can happen!)

Mansaf deserves the prestigious title of “the national dish of Jordan”, combining all the best things: the shared plate for the community; the sheer quantity for hospitality; the flavors for tradition. 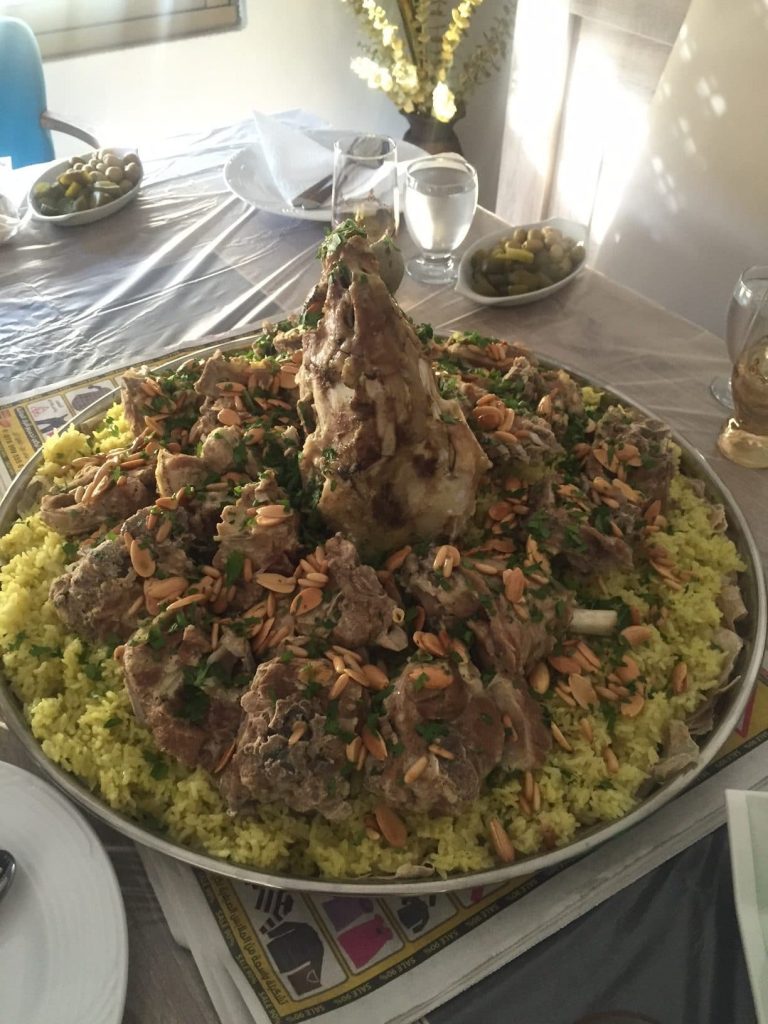 Go get yourself some Mansaf!

More important than where you eat it is how you eat it.

No.1 priority is doing so as part of a group. There are certain Mansaf etiquette guidelines that it is advisable to be aware of before you dive into this amazing food that you will never forget.

To study-up on said guidelines, check out this helpful article by StepFeed that outlines 6 key points to eating mansaf.

Mansaf in addition to being the national dish is also a national inside joke. To know mansaf, the taste, and the effects.  First, the taste. Each city/region has a specific way of making the dish that gives it a unique taste. There is an on-going debate about which city makes the best mansaf. Try not to get in the middle of these discussions and simply be agreeable with whomever you find yourself with. If they are from Karak, then Karaky mansaf is the best, from Salt, then Salt mansaf is the best. If they are from Irbid…get the picture?

In reference to the side effect, mansaf is better at putting you to sleep (or a loopy state) than Thanksgiving turkey. Once you start eating, it is difficult to stop, and once you have consumed a good quantity you will be ready for a good nap. the below video gives you a good idea of what we are talking about. It is because of the above that mansaf is the great insider joke for both Jordanians and those who wish they were Jordanian.